Home
Uncategorized
Marathon Time With A Dash Of Creativity

Marathons take a lot of physical stamina, and determination, however, just because runners are athletic, doesn’t mean they don’t have any creative flair. This year, the Air Force Marathon is giving athletes a chance to have some fun, and showcase their artistic abilities, while still ensuring they are ready for the race. There are prizes on offer that will set the runners hearts racing.

It’s fairly simple to enter the competition. Snap a one to two-minute video of yourself in preparation for the marathon. During the movie clip, detail wha 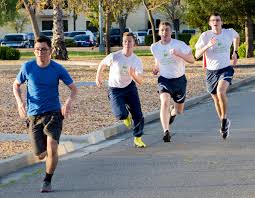 t motivates you, and of course, let everyone know what experience you have with the Air Force Marathon.

It doesn’t matter what camera you use, just make sure that you capture the film in horizontal view, in order to be considered. Finalists, chosen by the Air Force Marathon staff, will be put out to the public to vote on. Social media will be buzzing with creative masterpieces filmed by the athletes. Winners, which will be announced on June 15, are in store for some fantastic prizes which include VIP packages, free registrations into the marathon, and some amazing gift cards from sponsor, New Balance.

When Does The Marathon Take Place?

The AF Marathon is scheduled to take place on September 15, however, runners need to get their video entries in by May 31. The event is hosted by Northrop Grumman, USA, and Boeing. The days leading up to the main event will also be busy ones with The Sports & Fitness Expo taking place at the Nutter Center at Wright State University on the 13/14 September. On September 14 you can indulge in a gourmet pasta dinner and feast on the Breakfast of Champions.

Who said athletes can’t have fun? Grab your running shoes, work up a sweat, and show the world creativity at its best.